Comments
Rose Tattoo's performance at Sydney's Hordern Pavilion for Live-to-air broadcast on the soon-to-be national broadcaster, 2JJ. The performance is some time in 1978, and clearly well before the release of their first album in November of that year, given the amount of covers (including a most obscene version of Willie Dixon's "Hoochie Coochie Man"!) they play. This often circulates as being from 1976. An excellent, and I think unique, early Tatts soundboard show, there are a few pops and flashes of static, and the sound is not crystal clear, but it's a very good recording overall. A second of static/silence in track 3 has been eliminated by substituting the same notes from elsewhere in the song. 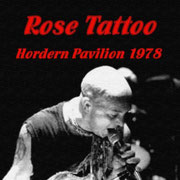 THIS IS ONLY A FANPAGE

FROM FANS FOR FANS