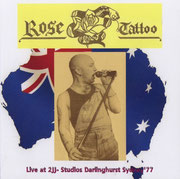 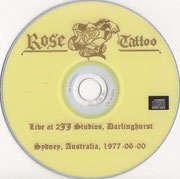 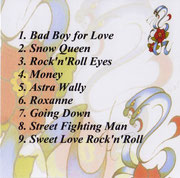 Comments
Excellent performance by Rose Tattoo on 2JJ-FM, Sydney, some time in June 1977. 2JJ was a governemnt station, which has since gone national - hence the non editing out of swear words and references to oral sex! Great show, and the earliest to have surfaced by the band. Angry sounds pretty relaxed, with friends of the band evidently in the studio audience, and three otherwise unknown songs are played - "Rock and Roll Eyes", "Roseanna" & "I love the Way you rock and roll". The sound quality is not quite as good as you would expect from an FM source nowadays, lacking a bit of presence and immediacy... but I'd give it 9/10. The announcer at the end starts playing the Stranglers' "Get a Grip on yourself" (released in April 1977) at the end, probably indicating that this version is sourced from an original broadcast.

THIS IS ONLY A FANPAGE

FROM FANS FOR FANS